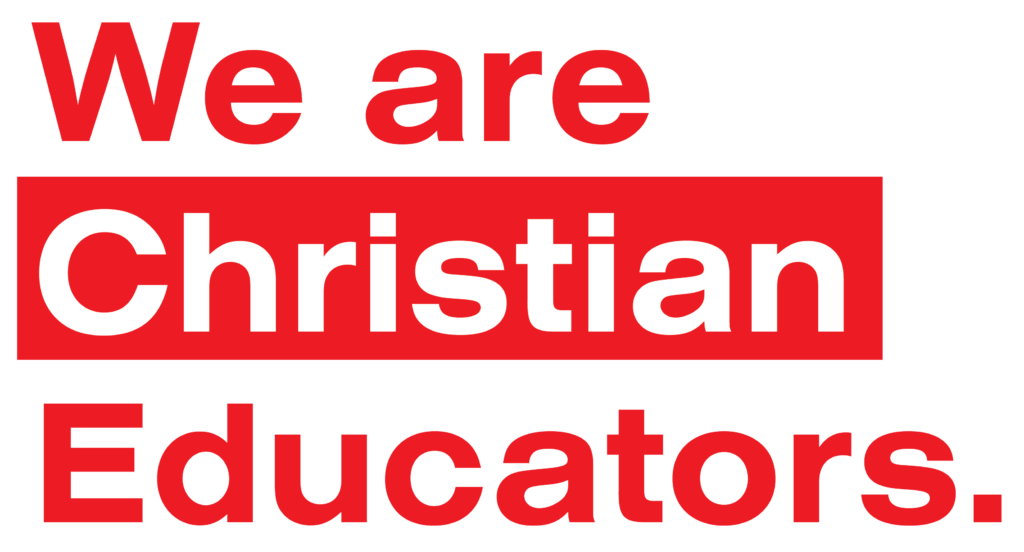 A professional association of educators – supporting, connecting, and protecting Christians working in our schools.

We believe God has a purpose for every Christian educator…

So we encourage, equip, connect, and protect them…

In order for them to serve as thriving ambassadors for Christ in our schools.

Scroll Down To Learn More About Christian Educators

At Christian Educators, we believe in…

David Schmus is the Executive Director of Christian Educators. He joined Christian Educators in 2015 and became Executive Director in 2017, and was honored to be mentored by two prior CE Executive Directors: Forrest Turpen and Finn Laursen. Prior to his tenure at Christian Educators, he was a high school AP US History/Government teacher and a Christian Club advisor for 15 years, being repeatedly honored as Most Inspirational Teacher. He holds an M.A. in Biblical Studies and Theology from Biola University, and has taught Biblical Worldview and Introduction to Teaching classes at Biola as an adjunct professor. David has been interviewed for numerous radio and online/print outlets, including World Magazine, Christianity Today, Salem and Bott radio networks, as well as several podcasts, including The World and Everything In It and the Moms in Prayer podcast. He leads and co-hosts the annual Rise Up Summit, an online conference that attracts over 10,000 Christian educators yearly. David and his wife Elizabeth have been married for over 30 years, have 5 daughters, one son, and are based in Orange County, California.

1953
National Educators Fellowship, Inc. (NEF) was organized in 1953 by Dr. Clyde M. Narramore, a psychologist for the Los Angeles County Schools and Benjamin S. Weiss, the principal of Metropolitan High School in Los Angeles, when they gathered 11 educators in Clyde’s home in Pasadena, California. The group was organized in response to an expressed need that more than half of the millions of children and youth attending America’s schools have no moral and spiritual training other than that which they may incidentally receive in their public school education. Educators needed to be equipped and encouraged to meet this need.

Within a few months, their meetings grew to 150 educators who worshipped, shared testimonies, and grew more excited about what God was doing. Clyde began to travel and speak to encourage Christian educators around the country. From this beginning, the national organization expanded.
1953
1955
Our magazine, Teachers of Vision, began in 1955 with the “Vision” newsletter.
Teachers of Vision
1955
1970
CEAI began National Conventions in 1970 that ran through 2003, with themes such as “Christ for the Crisis in Education” and “Learning from the Master Teacher.”
1970
1981
In 1981, the name of the organization was changed to Christian Educators Association and then to Christian Educators Association International (CEAI) in 1984.
1981
1991
In 1991 under the leadership of Forrest Turpen, CEAI successfully established the member insurance program, providing professional liability insurance and job action protection benefits for members, turning CEAI into an effective alternative to teachers’ unions, at a time when unions were embracing values more and more hostile to the Biblical worldview. This obviously met a need, as membership grew over 500% from 1991 to 2003.
1991
2003
After Finn Laursen assumed leadership in 2003, CEAI launched several new initiatives to equip educators and transform schools, including the Daniel Project in 2010, which raised up missional educational leaders to be “modern-day Daniels.”
2003
2015
In 2015, CEAI launched LIFT America, which is gathering educators in cities across the country to encourage and inspire them to take Jesus onto their campuses.
LIFT America
2015
2016
The Thiesen Scholarship for future missional public school educators was launched in 2016.
Thiesen Scholarship
2016
2017
Under the current leadership of Executive Director David Schmus (2017), Christian Educators has launched several new initiatives, such as the Rise Up Summit, a national online conference attended by thousands of educators, and the Turpen Grant, which awards grants of up to $500 to Members with Coverage. CEAI looks to continue to equip Christian educators to faithfully represent Christ in an increasingly challenging cultural environment. Would you pray for us and consider joining us in this critical mission?
Turpen Grant
2017
2021
In 2021, Christian Educators launched the AWAKE One-Day Experience to equip Christian educators to faithfully represent Christ in an increasingly challenging cultural environment. Find out how you can help bring an AWAKE experience to your area.
AWAKE
2021
2022
CEAI becomes Christian Educators, with a refreshing rebrand and updated mission/vision statement designed to reach the next generation of ambassadors for Christ in our schools.
2022